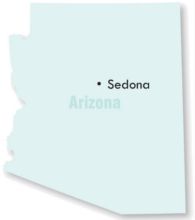 The Sedona/Red Rock region, located 30 miles south of Flagstaff is known internationally for its incredible beauty and natural recreational opportunities. While the US Census estimates the population to be 11,220 (Census 2005), the area currently hosts approximately 4-5 million visitors each year, a number that is expected to double in next 20 years. Not only is the city a popular tourist destination, but Sedona is situated at the base of Oak Creek Canyon where highways 89 and 179 meet, making the community an important transportation crossroads. Transportation options for these visitors, as well as community residents, were limited to either owning or renting an automobile, causing increased congestion on the few primary roads in the valley. Due to the valley's geography and pedestrian-unfriendly designs, walking within the picturesque town was difficult. Increasing congestion on both highway 89 and 179 threatened not only to harm air quality, but also to tarnish the attractiveness of the Sedona/Red Rock region to visitors. Residents were concerned that Sedona could lose its scenic beauty through widened roads and an endless line of traffic in the valley. 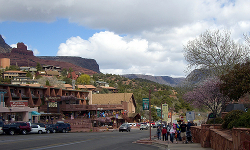 A consortium of regional governments developed a transportation plan to address concerns regarding increased levels of congestion in a major tourist region. The City of Sedona, Yavapai and Coconino counties, Coconino National Forest, the Northern Arizona Council of Governments with help from the Arizona Department of Transportation (ADOT) and the Community Transportation Association of America organized to look at regional transportation alternatives and created a transportation plan. The transportation plan included a mix of infrastructure improvements and policy changes, not only adding transit but also making the transit system viable through transit-oriented design elements. Policy changes for parking, roadway design, and a permitting system to enter the National forest were implemented. A major catalyst to the project was the hope that creating a true multimodal, livable community would both preserve its natural beauty and character and would increase the marketability of the region for visitors to make their stays lengthier.

Planning for a multi-modal Sedona began at a town hall meeting on transportation. The meeting sparked a discussion within the community on how transportation options could be improved for the city. Out of this initial discussion a group formed, calling themselves Active Citizens for Transportation Solutions. Through the work of this group as well as extensive coordination between the City of Sedona, Coconino County, and the Arizona Department of Transportation, and created a vision report entitled "Ensuring a Livable Future: Transportation and a Strategic Vision for the Greater Sedona Community," which proposed developing a public shuttle system serving both residents of the red rock area and visitors to Oak Creek Canyon. Active Citizens for Transportation Solutions commissioned an initial Transit Feasibility Study in 1998. 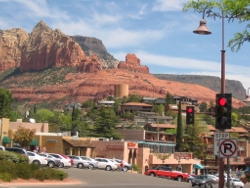 Out of this process came the Sedona Shuttle Feasibility Study that was adopted by the Sedona City Council in 2003. As public discussions continued, it became clear that an efficient, tourist-oriented transit service combined with pedestrian improvements, and disincentives for driving and parking cars, would help preserve the community character through relieving the traffic congestion. As the process continued, both the public and elected officials began to realize that a good transit system was not just an additional service to local residents, but it was an economic development strategy for bringing visitors and jobs to the region. Through continued discussions with the public and intergovernmental coordination, the city council authorized an agreement with Coconino County to examine the feasibility study proposals and create a final implementation plan for bringing cutting-edge transit service to Sedona.

The Sedona Transit Plan was adopted in June 2004, and the Sedona Roadrunner Transit began operation in October 2006. Today service includes a free circulator route between Uptown Sedona and Hillside shops along SR179 and a fee based commuter service between Cottonwood and Sedona. 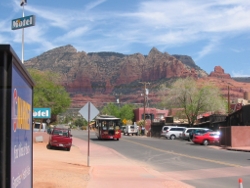 An important element of Phase 1 included finding a public or private agency to operate the RoadRunner. Initially, the City contracted with Coconino County to operate the shuttle because of their experience with Flagstaff's transit, but insurance liability issues created challenges with the multi-jurisdictional operation. The parties found something of a compromise by forming the Northern Arizona Intergovernmental Public Transportation Authority (NAIPTA), which partnered Sedona, Coconino County, Yavapai County, Flagstaff, Cottonwood and Northern Arizona University, to create a regional transit authority - the first of its kind in Arizona. Under Arizona law, NAIPTA is a separate political body whose board of directors represents each governmental entity according to population. Creating NAIPTA set the stage for a long range regional transit plan, solved Coconino County's liability issue, and got the RoadRunner on the ground.

The process was long and involved and did not lead to a single cure-all solution, rather a plan involving multiple levels of government providing a range of solutions addressing the transportation issue. The community decided not to implement the transportation plan halfway, as they knew tourist and other choice riders would not get out of their cars for an inconvenient transit system. By providing high frequency service in attractive, high profile, bio-diesel trolleys, Sedona RoadRunner surpassed ridership expectations and has made Sedona an even more enjoyable place to visit. By getting cars off the road and reducing the need for parking, visitors are better able to enjoy the sights and retail areas of Sedona. As Geoff Cross puts it, "We had to do it really well or not at all." And that is what the City has done: created a plan for a rural, efficient, multimodal transportation system.

Coconino County staff identified a few key recommendations for rural communities looking to replicate their success. First, they began by researching what other communities facing similar problems had done. For example, Sedona looked to Zion National Park's transit system and Breckenridge, Colorado, as well as other western resort towns with similar valley geographies and numbers of tourists. Secondly, they paid close attention to public involvement and a high quality process, focused on getting the entire community to see the benefits of a multimodal transportation system that was balanced and tourist-friendly. This process took time and patience, but it yielded a plan that was innovative, representative, and practical. Finally, the solutions Sedona reached were a mixture of infrastructure improvements as well as policy changes. This integrated mixture of physical, programmatic and policy changes was critical to success.