The Missoula Office of Planning and Grants (OPG) Urban Initiatives Division undertook its Urban Fringe Development Area (UFDA) project during 2007 as a means of providing city and county governments with a regional context for making decisions about residential growth on the edges of the City of Missoula. 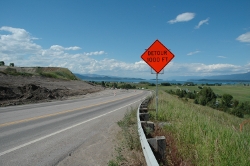 The project addresses lands within the Missoula Urban Service Area (URSA) with particular emphasis on potential growth on lands lying between the City limits and the URSA boundary. The Missoula Urban Service Area is the same in geographic extent as the Missoula City Waste Water Service Boundary and includes lands in the City of Missoula and unincorporated Missoula County land. The goal of the project was to identify how an estimated 15,000 new residential units can be accommodated within the URSA and develop implementation strategies for addressing growth in accordance with adopted policies applicable to the areas.

The project began by working with city and county staff and other agencies to collect information related to demographics, existing development patterns, natural resources, and infrastructure elements. The data collection effort established a baseline for consideration of where new growth should occur. An inventory of developable lands identified lands suitable for development. The project's initial phases were followed by public presentations of data to gather community comments, the development of growth scenarios, and a suitability analysis. 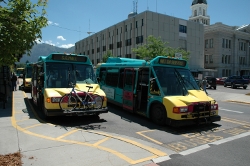 Four growth scenarios were prepared by OPG to describe the number and locations of anticipated new dwelling units, including already entitled lots. Each scenario presents varying growth plans in fourteen "neighborhoods" within the URSA. Three of the scenarios mirror scenarios presented in the Envision Missoula project, a long-range Transportation Plan Update process underway in the community.

OPG staff created a series of GIS suitability maps of lands inside the URSA to facilitate the analysis of growth scenarios. The suitability analysis balances consideration of efficient public services, preservation of natural resources, continuation of agricultural opportunities, and availability of existing lands. Eight criteria were used to determine the advantages of and challenges to residential development within 14 neighborhoods in the URSA. These criteria included access or proximity to 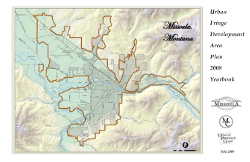 A composite suitability map was created by stacking all criteria on top of each other to create an overall suitability rating, where each of the eight criteria was equally weighted. The combined final analysis removed the constrained lands from consideration as growth areas. OPG staff ultimately recommended a growth scenario in response to the Growth Policy goals, public comments and agency input, existing zoning, constrained lands, changing market/demographics, entitled lots, and probable infrastructure investments. In November 2008, the UFDA was adopted as an amendment to the 2005 Missoula County Growth Policy. The amendment will include a map showing the preferred residential development allocation within the URSA.

Agency coordination and public involvement activities were extensive during the project. The planning process required participation from City and County agencies and included frequent updates to the Consolidated Planning Board, the County Commissioners and the City Council through the Council's Plat, Annexation, and Zoning Committee. Public outreach efforts by the OPG were notable as evidenced by some fifty presentations to public agencies, neighborhood councils, civic and private organizations, four public Open Houses, and regular project communications via the City's website. As noted earlier, the project has been coordinated with other ongoing processes particularly the Envision Missoula Long Range Transportation Plan Update.

Extensive agency coordination and public involvement efforts were undertaken as part of this project. Investment of these resources up from facilitate the successful integration of the UFDA with the 2005 Missoula County Growth Policy and Envision Missoula Transportation Plan Update

The UFDA project can be implemented through targeted future public infrastructure investments, future neighborhood plans, annexation discussions, and development proposals. UFDA does not change zoning but provides a context within the Growth Policy for the review and recommendation of future zoning change proposals. The UFDA project directs residential density into certain URSA areas with existing public infrastructure that can accommodate increased residential development. OPG maintains a web site with project documents and downloadable versions of the suitability maps and scenario planning maps developed for the project.