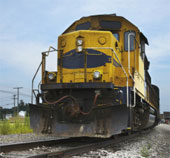 The Butte, Anaconda and Pacific Railway (reporting mark BAP) is a short line railroad in the U.S. state of Montana which was founded in 1892. It was financed by the interests behind the Anaconda Copper Mining Company and operated primarily to carry copper ore from the mines at Butte, Montana to the smelters at Anaconda, Montana, although the company was chartered as a common carrier and also carried passengers and general freight.

The BA&P was an electrification pioneer, converting in 1913 and being the first primarily freight railroad to electrify. Electrification was at 2,400 Volts DC; the work was performed by General Electric and the railroad's own staff. The electrification was abandoned in 1967 as it had become cheaper to operate diesel-electric locomotives.

The railroad as a whole lost much of its business following the closure of the Anaconda smelters, and in 1985 was sold to a consortium of local investors and reconstituted as the Rarus Railway (reporting mark RARW). On July 19, 2007, Patriot Rail Corporation, the parent company which acquired Rarus Railway in May 2007, announced that the railway's name was officially changed back to Butte, Anaconda and Pacific Railway.

The Chicago, Burlington and Quincy Railroad (reporting mark CBQ) was a railroad that operated in the Midwestern United States. Commonly referred to as the Burlington or as the Q, the Burlington Route served a large area, including extensive trackage in the states of Colorado, Illinois, Iowa, Kentucky, Missouri, Montana, Nebraska, Wisconsin, Wyoming, and through subsidiaries Colorado and Southern Railway, Fort Worth and Denver Railway, and Burlington-Rock Island Railroad, New Mexico and Texas. Its primary connections included Chicago, Minneapolis-St. Paul, St. Louis, Kansas City and Denver. Because of this extensive trackage in the midwest and mountain states, the Q used the slogans "Everywhere West," "Way of the Zephyrs," and "The Way West."

The Montana Western Railway (reporting mark MW) was an American railroad constructed between the towns of Conrad and Valier in Pondera County, Montana, a distance of 20 miles (32 km). The railroad was constructed in 1909 by the Valier Land and Water Company as part of an effort to develop new agricultural lands in the Valier area. The line connected with the Great Northern Railway (GN) at Conrad, and the Great Northern later assumed control of the MW. The trackage continues to be operated today by the BNSF Railway, corporate successor to the GN.

The SOO Line Railroad (reporting mark SOO) is the primary United States railroad subsidiary of the Canadian Pacific Railway (CP), controlled through the Soo Line Corporation, and one of seven U.S. Class I railroads. Although it is named for the Minneapolis, St. Paul and Sault Ste. Marie Railroad (MStP&SSM), which was commonly known as the Soo Line after the phonetic spelling of Sault, it was formed in 1961 by the consolidation of that company with two other CP subsidiaries, the Duluth, South Shore and Atlantic Railroad and Wisconsin Central Railroad. It is also the successor to other Class I railroads, including the Minneapolis, Northfield and Southern Railway (acquired 1982) and Chicago, Milwaukee, St. Paul and Pacific Railroad (Milwaukee Road, acquired at bankruptcy in 1985).

Montana Rail Link (reporting mark MRL) is a privately held Class II railroad in the United States. MRL, which operates on trackage originally built by the Northern Pacific Railway, is a unit of the Washington Companies, and is headquartered in Missoula, Montana. The railroad runs between Huntley, Montana and Spokane, Washington, largely within Montana, and the main line passes through the towns of Missoula, Livingston, Bozeman, and Helena. Montana Rail Link connects with the BNSF on both ends and also in Garrison, Montana. The railroad has over 900 miles of track, serves 100 stations, and employs approximately 1,000 personnel. The main yard is in Laurel, Montana, while a smaller yard is in Missoula.

The Milwaukee Road, officially the Chicago, Milwaukee, St. Paul and Pacific Railroad (CMStP&P RR) (reporting mark MILW), was a Class I railroad that operated in the Midwest and Northwest of the United States from 1847 until its merger into the Soo Line Railroad on January 1, 1986. The company went through several official names and faced bankruptcy several times in that period. While the railroad does not exist as a separate entity anymore, it is still commemorated in buildings like the historic Milwaukee Road Depot in Minneapolis, Minnesota and in railroad hardware still maintained by railfans, such as the Milwaukee Road 261 steam locomotive.

The Northern Pacific Railway (reporting mark NP) was a railway that operated in the north-central region of the United States. The railroad served a large area, including extensive trackage in the states of Idaho, Minnesota, Montana, North Dakota, Oregon, Washington and Wisconsin. In addition the company had international lines to Winnipeg, Manitoba and south eastern British Columbia, Canada. The company was headquartered first in Brainerd, Minnesota, then in Saint Paul, Minnesota.